Giorgio Germont, was sung with a voice of strong, yet mellow, baritonal heft by Robert Aaron Taylor… and… “Di provenza” was sung with deep feeling. 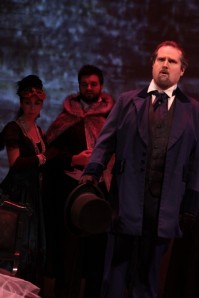 Robert Aaron Taylor, as Alfredo’s father, sang with wonderful line, resonant tones and finished phrases. He, too, was most effective in the final scene, as he realizes the harm he has done.

The highlight of the production was the Violetta/elder Germont duet… Every facet of the duet was made vivid. Robert Aaron Taylor, as the elder Germont in his lyrical stillness, convinced me that he was not a villain, not a bigot, but full of remorse for his very faith.  This part of the opera was really first-rate.

The Counselor Mr. Tenenbaum, interpreted by baritone Robert Aaron Taylor, in addition to his authoritative scenic presence, has displayed a voice of good quality in the aria ‘Sono un vecchio saggio’ and a perfect diction of the Italian language. 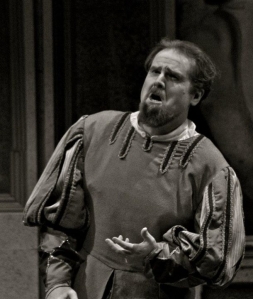 Rigoletto in Rigoletto with Rimrock Opera

But it was Robert Aaron Taylor as Rigoletto, the hunchbacked court jester, who created a solid foundation for the entire performance. Mr. Taylor showed us right from the beginning scene that Rigoletto’s own bitterness, superstitions, and Italian love of the vendetta would lead to tragedy in the classic sense. Yet I found myself silently saying to him, don’t do it, don’t do it! He did.

..during a recent rehearsal, even though the performers were dressed in jeans… (observers) were so caught up in baritone Robert Aaron Taylor’s gut-wrenching aria in the title role of the Duke’s jester, their jaws fell open.

Singing in the role of the tortured father with the sharp tongue, Taylor is striking, with rich tones and control even though he collapses weeping during his aria. 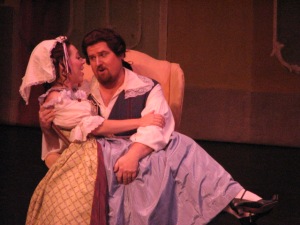 Figaro in The Marriage of Figaro with Rimrock Opera

Robert Aaron Taylor, who showed off his comedic side as Dr. Dulcamara in ROC’s ‘The Elixir of Love,’ plays the gallant title character. Although he’s a foundling, Figaro proves he has more class than his boss, the Count. Taylor spices up the role with his rich baritone. 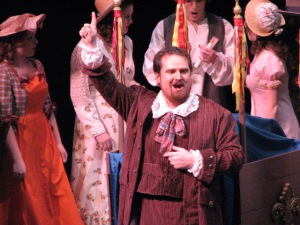 Pair that with other strong performances, especially… Robert Aaron Taylor’s fun performance as the snake oil salesman Dulcamara, and you’ve got one of ROC’s finest operas. Taylor is a native of Tennessee who performed in Rimrock Opera’s production last fall of “Girl of the Golden West.” He learned his complicated role in “Elixir” in just two weeks after another performer was forced to cancel his appearance here. 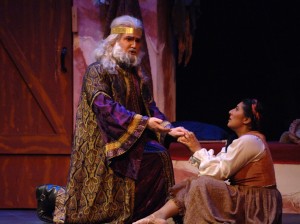 The kings made a solid vocal trio… Baritone Robert Aaron Taylor as Melchior came the closest to creating Menotti’s ripe, Romantic phrasing with appropriate vocal warmth, and his character’s empathy was palpable.

… The marvelous scene between Phyllis and her suitors, Lords Tolloller and Mountararat (Robert Taylor), … especially stands out for its direction and proves these performers can act as well as sing.

… and Robert Taylor are enjoyable as the two gents fighting over Phyllis who eventually decide their friendship is too important to risk over a woman.

…Robert Taylor as The Bonze….added significantly to the mix… 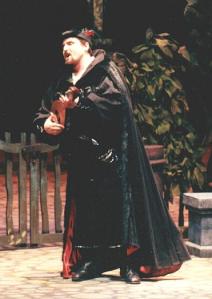 The musical talent in this production is deep… Robert Taylor and …fill the role of Mephistopheles, the sharply dressed devil who gives Faust both the youth and love he seeks in exchange for his soul. Taylor and… sing with powerful, robust bass voices, and were at times rather funny. 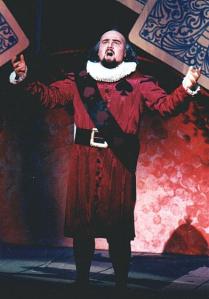 …and Robert Taylor were sufficiently comic in their nastiness as Leandro, the prime minister who plots against the King and who allies himself with the Princess Clarissa, she being anxious to undo the Prince and thereby inherit the throne.

Robert Taylor played Simone Friday and, unexpectedly, Saturday as well.  It was indeed a treat to hear his wonderfully penetrating bass voice with both casts.  As an actor and a singer, he served as the anchor for everyone on stage.

…Robert Taylor portrayed the humorous Pooh-Bah. He strutted as he sang of his importance — the epitome of every corrupt politician. If you know a politician whose main job is just to be full of himself, you’ve met Pooh-Bah…

…I must commend the singers, particularly….Robert Taylor, a terrific, sonorous-voiced Pooh-Bah, the fellow in the story who holds all those official positions…